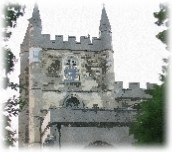 The record of the various ringing performances at St Michael’s

St Michael’s has a rich history of ringing as will be noted from the History pages of this website, but on these pages you will find a record of the various ringing performances, by both the local Sunday band and by visiting ringers.

Generally ‘performances’ fall into one of three categories:-

Peal Boards - Many peals are also recorded on peal boards attached to the walls of the ringing rooms in the towers where they took place, and in the peal books of local change-ringing associations.